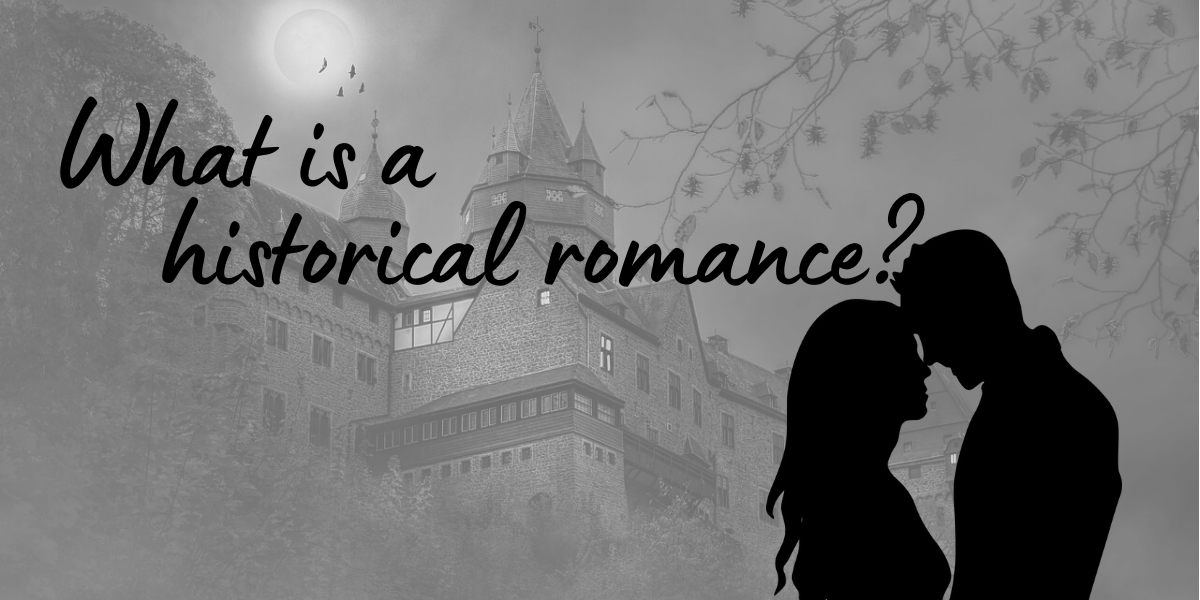 A historical romance is a romance story that has the setting (the location) in a time frame placed in the past. This means that the customs, culture and experiences the characters have are all different than what we now experience. And because the historical romance category is so broad, there’re sub-genres that narrow down the time frame to help you pick the type of romance you’re thinking of writing.

RWA defines a historical romance as “romance novels that are set prior to 1950.” So, if you wish to write a historical romance, this means that every aspect of your story will be set prior to 1950. But not all stories are in the same era in the past!! You’ll need to think about the era you’ll want to write in and learn everything there is to know about that era. So, when you write, your story will match that era.

This is where you’ll dig deep to find the customs, the language, the lingo, the mannerisms, the clothing and more in your chosen era.

Why? Because readers expect you to.

You’ll find many avid readers who’ll know when you’ve done your homework and when you haven’t. And many will call you on it. As a voracious reader myself, it drives me crazy I read a modern idea in a historical story.

Each of the following are the categories on Amazon. And each of them are a different era of history. And while each are a historical romance, they are also a little different.

What is a 20th Century Historical romance?

We all know that the major events that happened during this time was WWI and WWII. So the majority of stories created in this category will be tied in and around the wars in some way.

What is an Ancient World Historical romance?

An Ancient World romance is a story that’s based in the 3rd or 4th thru to 6th or 7th centuries, and maybe even ancient Greece or ancient Rome.

These romances are in a timeframe long past, many being before AD 500. The characters, the setting, and their troubles would all have to match that era to be realistic and believable.

What is a Medieval Historical romance?

A Medieval romance is a story that’s based in Middle Ages time, with old-fashioned values and primitive cultures. The timeframe would be somewhere between AD 500 to 1400-1500.

Romances in this time would be filled with knights and damsels in distress! The knights would fight battles of honor to win the girl as well as their reputation, all on the backdrop of a time that doesn’t have running water and electricity!!

So you as the author, need to make sure you understand this age and know how to have your characters interact with this time period.

What is a Regency Historical romance?

Regency romances are set during the time period of British Regency (1811-1820) or early 19th Century. This is where the characters are attending social gatherings such as carriage rides, morning calls, dinner parties, walks in the garden, balls, and operas all in a hope to find that suitable marriage partner.

The catch being to make sure that you don’t add modern thought processes to characters in this timeframe. This is a distinct genre that has its own stylistic conventions that you must be aware of and attempt to follow.

What is a Scottish Historical romance?

A Scottish romance is based in the highlands of Scotland with lairds and clans and glens and small villages in the valleys of Scotland. Books with these characters deal with chivalry and kilts and knights and damsels. Yes, this type of romance can be mixed with another, an example is a Scottish Medieval Historical romance!! Fun huh!

This is a very popular sub-genre that earned its own category, usually with “highlands” in the title or series title name.

What is a Tudor Historical romance?

A Tudor romance is a romance that has the setting of the story somewhere between 1485 to 1603 in British history. Because Tudor means “pertaining or belonging to the English royal house of Tudor” then your romance is going to have characters and their world connect to or a part of the Elizabethan period and culture.

This would include kings and monarchs and fancy dresses and wealthy people. Religious/church ideas could also be added making a huge range of sub-genres that can come from this type of story.

What is a Victorian Historical romance?

A Victorian romance is a romance that’s heavy into the Victorian era when Queen Victoria reigned. As she reigned for more than 60yrs (1837 to 1901), you’ll have a vast array of events, issues and inventions to choose from to make your story fun and interesting.

These are stories filled with Dukes and Duchesses, heirs and heiresses, dowries and wealth all wrapped up in scandals and mystery and devotion and seduction making it possible to write a huge spectrum of ideas.

What is a Viking Historical romance?

A Viking romance has the characters raiding and colonizing in order to conquest their lands and their women. All based in the Middle Ages (793-1066), these stories are typical alpha male stories where the hero tames the heroine.

Information packages, already done for you:

Understanding the differences between the different types of historical romance can help you to write in the genre of your choice. To help you make sure your information is accurate and consistent, check out these info packages that’ve been created for you. Each is a different era in history and has info you can use to make sure your worlds and your characters are realistic and believable!

Each of these are completely FREE, meaning you don’t need to give me your email.

Click each “name” below to get a free pdf with a list of sites that you can start digging deep into your story!

We noticed you're visiting from Canada. We've updated our prices to Canadian dollar for your shopping convenience. Use United States (US) dollar instead. Dismiss